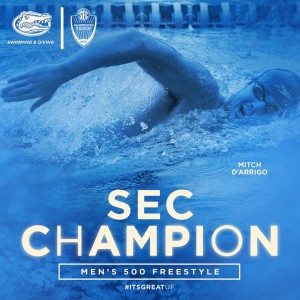 AUBURN, Ala. – The University of Florida No. 1 men’s and No.4-ranked women’s swimming & diving teams sit second and third following day two of the Southeastern Conference Championships. The Gators captured their third and fourth SEC titles during tonight’s finals. This week’s meet is being held at the James E. Martin Aquatic Center in Auburn, Ala.

Florida’s women set the tone in the 200-yard individual medley relay as the Gators captured first, second and third in the 200-yard individual medley, highlighted by redshirt freshman Theresa Michalak capturing her first-career SEC Championship with a mark of 1:56.09. Right behind Michalak were juniors Lindsey McKnight and Ashlee Linn who clocked times of 1:56.16 and 1:56.40, respectively. Their three times rank third, fourth and fifth in school history.

In the other individual events for the women, juniors Jessica Thielmann and Natalie Hinds finished runner-up and sixth in the 500-yard and 50-yard freestyle races with times of 4:36.62 and 22.13 seconds, respectively.

On the men’s side, sophomore Mitch D’Arrigo began the night by winning the men’s 500-yard freestyle, his first-career SEC Championship, in a time of 4:10.77. That mark ranks him second in program history behind senior Dan Wallace’s time of 4:10.73, which he set at last season’s conference championships.

In addition to D’Arrigo, senior Eduardo Solaeche-Gomez and freshman Caeleb Dressel finished runner-up in the men’s 200-yard individual medley (1:43.15) and 50-yard freestyle (18.93). Earlier in the day, Dressel clocked Florida’s second-fastest time in program history, as he touched the wall in 18.89 seconds during this morning’s prelims.

UF is back in action tomorrow for day three of the SEC Championships with prelims beginning at 11:00 a.m. ET and finals at 7:00 p.m.

On the women’s 200 IM finishing first, second and third…
“It was great. To have those three girls (Theresa Michalak, Lindsey McKnight, Ashlee Linn) do that well is great. They are all younger so to have big improvements and post their best times is great. It’s tough when you have to replace Elizabeth Beisel but they did a great job.”

On the men’s 500-yard freestyle…
“It was a good race. Those guys (Mitch D’Arrigo and Dan Wallace) know each other real well. That was race was a little bit of cat-and-mouse. Dan knows that Mitch likes to take over in the end and Mitch knew that Dan likes to get a fast start so it was fun for both of them. It was good times for each of them and I’m real pleased with where they are as we look towards to NCAA meet.”

On what each team needs to improve upon…
“We have to come in tomorrow morning and do really well. We were great this morning and we put ourselves in a good position tonight and I thought we did well this evening. We could have been better in a couple of spots but we just have to keep coming to the blocks. We closed the gap a little bit with Georgia on the men’s side and it’s really tight in the women’s meet. It’s really fun.”

Talking Gators:
Sophomore Mitch D’Arrigo:
On racing against Dan Wallace and their relationship… 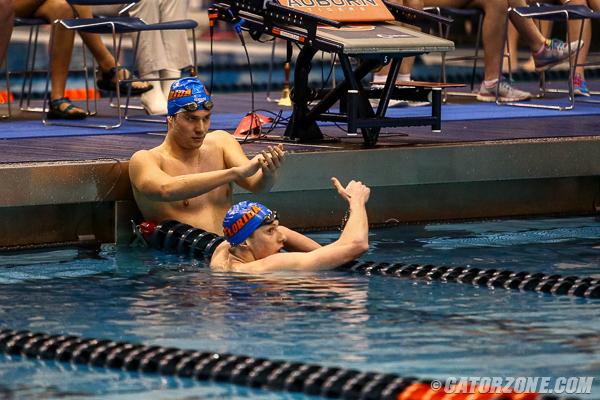 “Dan (Wallace) is one of the best athletes around right now. He’s pushed me really hard the whole year, as losing to him last year (D’Arrigo placed second to Wallace in the 500-yard freestyle at the 2014 SEC Championships) was really hard for me. Dan just really knows what to do and how to race. I just tried to stay with him throughout the race and it happened to end with me winning, which I am very happy about.”

On winning his first-career SEC title…
“I still haven’t realized it yet. I was very nervous coming into the race this year after what happened last year but I’m obviously really excited.”

Florida notched 10 NCAA automatic qualifying marks through the first two days of competition at the SEC Championships, including:

For more information on the conference meet or tonight’s finals, check out the SEC Championships central web page here. Also, Gator fans are encouraged to follow the swimming and diving program via Twitter or Facebook.