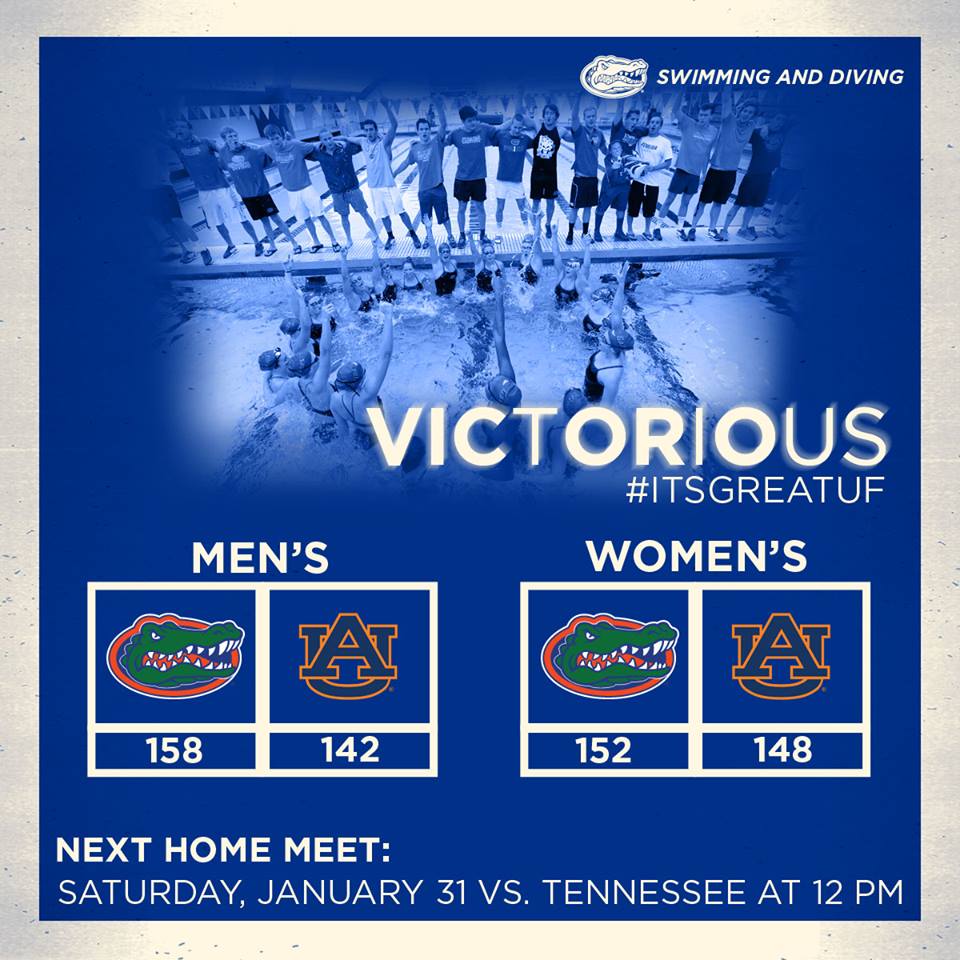 Some very fast swimming turned the SEC rivalry red-hot on the men’s side, as both team’s studs appear to be gearing up for the conference championships in just under a month.

Florida’s men and women continued its recent success against Auburn, as the men now lead the Tigers 26-16 and the Gator women lead AU 22-13 all-time. 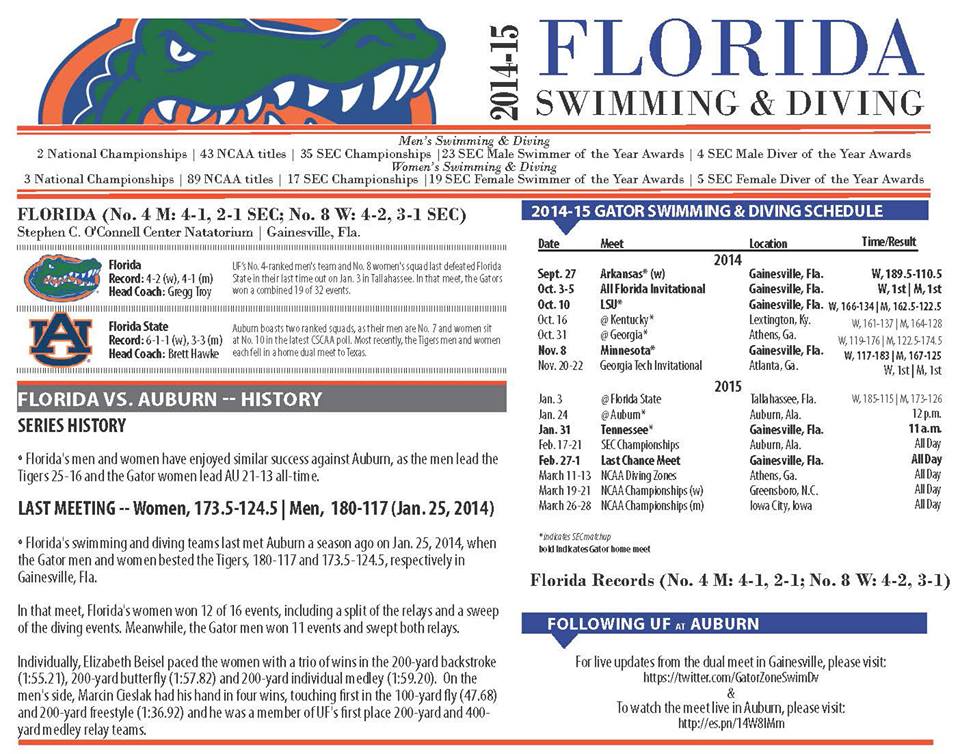 The Gator men were led by their sprinters as they swept all three sprint events with freshman Caeleb Dressel winning the 50-yard (19.61) and 100-yard (43.88) freestyle events and junior Pawel Werner taking home first place honors in the 200-yard freestyle (1:36.25).

UF’s women were led by junior Jessica Thielmann, as she won the 200-yard, 500-yard and 1,000-yard freestyle events in 1:48.79, 4:47.24 and 9:43.17, respectively. On the boards, Thielmann’s classmate Kahlia Warner won the one-meter (322.13) and three-meter (322.58) dives notching her eighth and ninth individual victories of the season.
Overall, the Gators captured 21 first place finishes through 32 events and registered multiple NCAA ‘B’ provisional marks throughout the meet.
UF’s men now sport a 5-1 (3-1 SEC) dual meet record, while the Gator women are a solid 5-2 (4-2 SEC) so far this season.
Florida returns home next weekend to finish off its regular season against Tennessee in the Stephen C. O’Connell Center Natatorium on January 31 at 11 a.m. In addition to that meet being senior day, it will be Florida’s final meet before the SEC Championships (Feb. 17-21).

TROY’S TALKING
On his overall thoughts on the meet…
“Both squad’s showed a lot of character in how they raced today. We had a variety of people step up to score in key situations for us. We still have some technical issues to address but we are moving in the right direction. It was a great team effort.”
Head Coach Gregg Troy

FREESTYLING
In addition to the Gator men’s success in the sprint events, Florida’s women won two of three sprint events with Thielmann winning the aforementioned 200-yard free and her classmate Natalie Hinds placing first in the 100-yard freestyle in a time of 48.84.

I BELIEVE I CAN FLY
Seniors Christian Paul-Homer and Dan Wallace won the 100-yard and 200-yard butterfly races in times of 47.64 seconds and 1:46.97, respectively.

BREASTSTROK
Senior Matt Elliott notched the Gators lone victory in all the breaststroke events, as he won the men’s 200-yard breast in a time of 1:56.47.

DOING IT ALL
Senior Eduardo Solaeche-Gomez and redshirt freshman Theresa Michalak placed first in the men’s and women’s 200-yard individual medley with marks of 1:46.57 and 1:59.88, respectively. 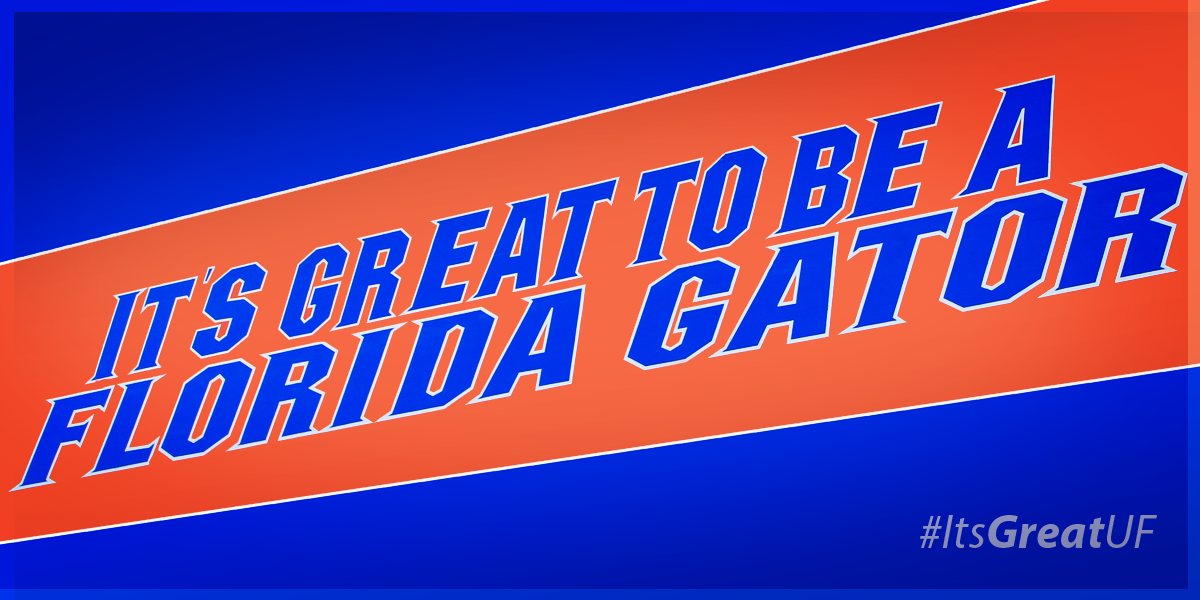