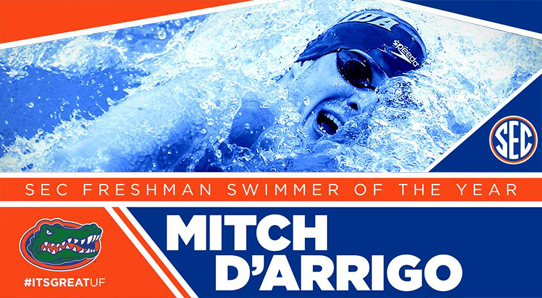 Troy was named the SEC Men’s Coach of the Year for the second year in a row after UF brought home its second consecutive and 35th overall Southeastern Conference Championship behind nine SEC titles. Troy was awarded the conference’s Coach of the Year award for the sixth time in his career.

At the NCAA Championships, Florida tallied two national titles and finished in third place with 387 points, representing the highest finish for the Orange and Blue in 23 years. Since Troy took over the men’s team before the 1999-2000 season, the Gators have scored a top-10 finish at the national meet every year. During the 2013-14 season, Florida men set 12 of a possible 18 school records.

“It is always an honor when you are in that type of situation,” Troy said. “The real tribute is to the staff. We have a fantastic staff- assistant coaches (Anthony Nesty, Martyn Wilby, Steve Jungbluth and Leah Martindale-Stancil), diving coach (Donnie Craine), trainers (Tommy Stich) and strength coach (Matt DeLancey), You put a great staff like that together with some fantastic athletes you get some great results. I’m really happy for everyone involved in the program and thank them for all their help in the special year that we had.”

A senior from Warsaw, Poland, Cieslak becomes Florida’s 1 0th SEC Male Swimmer of the Year and the first since the SEC changed seasonal awards to a voting process done at the conclusion of the season. Cieslak, a double major in finance and sport management, was the NCAA Championships High Point of the Meet after winning the 200 individual medley and 100 butterfly NCAA titles and finishing second in the 200 butterfly.

“Marcin’s honor is well deserved,” Troy said. “He was the leading point scorer at the NCAA Championships and made all of our relays go. He was consistently fantastic all year. The award could not go to a more worthy guy his senior year.”

D’Arrigo becomes the eighth Gator swimmer under Troy’s tutelage to win SEC Male Freshman of the Year. The freshman from Rome, Italy, earned NCAA First-Team All-American (top-eight) status in three individual events and swam on Florida’s silver medal 800 freestyle relay. He was also the highest placing freshman at NCAAs in the 200 freestyle and the 1650 freestyle.

At the SEC Championships, D’Arrigo, a linguistics major, captured a trio of silver medals. Ironically, all three of D’Arrigo’s second place finishes (200 free, 500 free and 1650 free) were behind Gator upperclassmen. D’Arrigo’s 1650 free and 500 free rank second and third, respectively, in Florida history.

“Mitch had an outstanding freshman year,” Troy said. “He showed tremendous improvements in events like the mile, which he never really swam much of before he came here. He showed that he is a world class middle distance freestyler. He raced well at every level- dual meet, conference and NCAAs.”

deBorde was named the Men’s Scholar-Athlete of the Year and will graduate UF in December with a degree in Industrial & Systems Engineering. deBorde has been a leader in UF’s athletic community and a key member outside of the pool for the swim program, serving as the Student-Athlete Advisory Council President and as one of the 2013-14 team captains. The senior from Longwood, Fla., has been named to the College of Engineering Dean’s List from Fall 2010 to Fall 2013.

“I’m really proud of Brad deBorde,” Troy said. “The guy has come a long way since he has been here. He made a lot of our relays work and swam one of the toughest programs at the NCAA Championships. He got better and better every year he was here.”

At the Southeastern Conference Championships, senior Elizabeth Beisel was named the SEC Commissioner’s Trophy Recipient for scoring the most points at the meet after winning both the 200 backstroke and 400 individual medley SEC titles, becoming only the fourth swimmer in SEC history to win multiple events in all four years of competition.

Also at SECs, redshirt senior Sebastien Rousseau was voted the SEC Swimmer of the Meet and named the SEC Commissioner’s Trophy Recipient for scoring the most points at the SEC Championships. Rousseau picked up SEC titles in the 200 fly, 200 free and 200 IM.